Like the much-loved Friendsgiving, my friends from college and I keep in touch each year around the December holidays as well, dubbed “Friendsmas” affectionately by some. We just had our annual celebration, so I thought it would be fun to share what each of us made to give you some ideas if you have a party on the books (or are just looking for festive recipes)! We do it potluck style so this includes the exact recipes I used, as well as whatever else I saw on the table.

We did a White Elephant gift exchange for the first time this year too…so read on to the end to see some fun ideas for that! 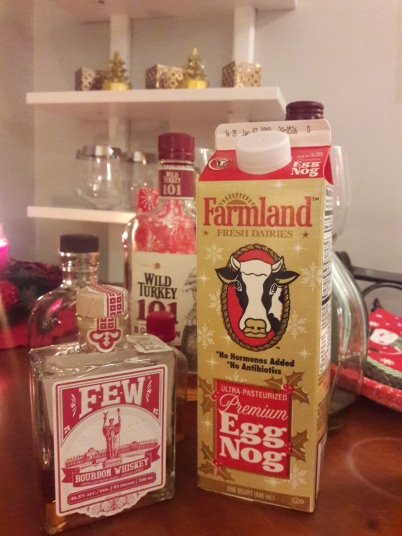 This works especially well if you have a lot of random small bottles of whiskey around (as I did), or you can just pick up a bunch of nips so people can choose their poison when they spike their nog! That said, make sure the drink you buy is labeled “egg nog” not just “nog.” They are not the same and I had a rude awakening one year when I bought watery “nog” on accident!

My friend (who hosted the party) made a classic Cosmo for the cocktail of choice, but in red martini glasses with a cranberry-mint garnish, they became instantly festive!

Obviously having water easily available is a must, but I also like having cans of seltzer, because I feel like the bubbles are a nice welcome to your tummy after eating tons of rich food and sugary treats.

I got all my recipes from an episode or two of The Pioneer Woman (they have the festive party-themed ones on now!), and these are really easy and cute. We used mozzarella balls so we didn’t have to do any cutting, and my grocery store didn’t have spinach tortellini so they were less “green.” My only rec would be to make double the amount of sauce to be able to really drizzle it everywhere!

These were really yummy, and added more substance to the mix having a lean meat, but they were a little more of a pain to make than I wanted. I also forgot to marinate the chicken the day before, so that added a lot of time, and mine did the same thing the other reviews said, with the marinade really charring up my grill pan, even though I tried to scrape a lot of it off first. That said, they were a hit at the party and the peanut sauce is to die for. 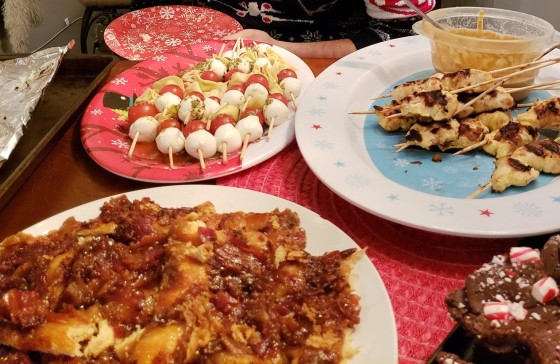 The yummiest, unhealthiest thing EVER! Has become a tradition for this friend to make it every year.

This was a family recipe specialty, but similar to what they did is here (though without spinach): https://www.foodnetwork.com/recipes/giada-de-laurentiis/lasagna-rolls-recipe-1943979

Make Your Own Crostini

My friend put out little slices of toasted bread, mascarpone cheese, blueberries, blackberries, and a bottle of hot honey. They tasted divine together, plus it was so easy since all you have to do is put it out and everyone can make their own. Plus the bread never got soggy!

The one thing we thought we needed but no one brought, to balance out all the unhealthy-ness. Just a recommendation!

On-theme, AND nutella combined with cinnamon? We had no trouble tearing this tree apart.

Also from The Pioneer Woman, this was SO easy to make, tasted like made-from-scratch fudge, and was very photogenic. Win, win, and win.

These were honestly way better than I thought they would be just based off the ingredients. Just premade cookie dough, topped with brownie batter and baked. SO good. 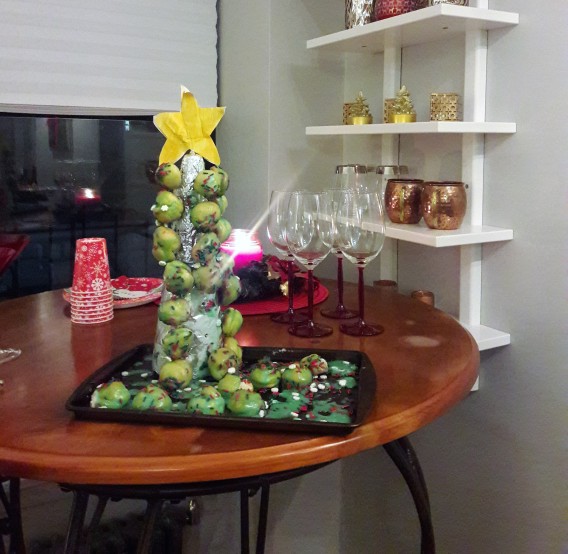 I thought this was extra fun to include because it’s not a typical go-to party dessert, but they tasted AMAZING and would be a nice surprise. Though the Christmas tree didn’t turn out exactly how they wanted, the flavor was all there.

Baked apple cinnamon muffins and listened to @weare_bandpractice's breakup song concert this morning and it made getting out of bed wayyy easier 🙌
Grateful for evening walks in @socratespark and that liquor stores were deemed "essential" businesses
I'm on the EDGE 🎶 (of glory) CC: @edgenyc
Wow followed by this sunrise this morning 🌞🌞🌞
%d bloggers like this: